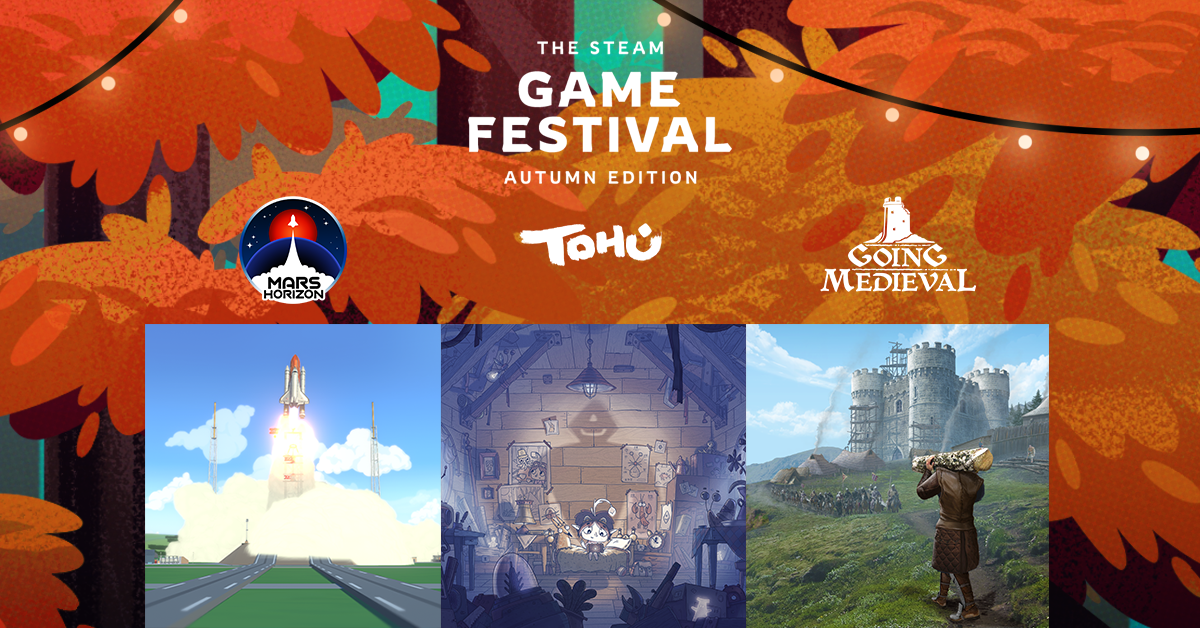 We’re in the Steam Festival again this Autumn! This awesome event runs from 7th-13th October, so please join us then to play three of our wonderful upcoming games, Going Medieval, Mars Horizon, and TOHU.

Check out lots of info about each game below 👇

Going Medieval is a medieval colony building sim where 95% of the global population has perished due to the rampant plague. It’s up to the player to guide survivors in such a world by building simple settlements or multi-story fortresses. With simple-to-use 3D terrain tools, you can create the perfect stronghold, but taking care of your colonists is also part of the experience – they need protection from starvation and the elements. Maintain their emotional states, as their moods are affected if their needs and wants aren’t met. You will want them at their best since outlaws, barbarians, and fanatics will attack your colony in this classless, borderless, and lawless post-calamity age.

This will be Going Medieval’s first demo! This is a great chance for people who missed out on the beta earlier this year too. The Irregular Corporation and developers Foxy Voxel will be hosting a stream playing the demo at 6PM on October 8th, add it to your schedule here.

If you want to stay up to date with Going Medieval news follow them on:
| Twitter | Discord |

We are also bringing Mars Horizon back for a demo in this Festival too!
For players who missed out on the previous demo, you will take control of a major space agency in this strategy & management simulation game. Your final objective is simple: guide humanity to Mars.

From the creation of your base and the design of the right spacecraft to achieve your first mission in space, you will be able to write your alternate history of the space race. Keep in mind that every choice is crucial and can allow you to be the first agency to land on The Moon.

The developers are also hosting some live streams during the festival, join them on October 8th at 2pm BST to know more about the game and ask all of your space themed questions.

Mars Horizon is set to release later this year on PC (Steam), PlayStation 4, Xbox One and Nintendo Switch.

TOHU is a brand new adventure game set amongst a world of weird and wonderful fish planets, by the wonderful minds behind Spirit Roots – Fireart Games. Explore beautiful environments and solve intricate puzzles as a little girl, joined by her mechanical alter-ego, Cubus. Together they will discover the truth about themselves and the mysterious Sacred Engine that powers their world.

Meet unique folks during this memorable journey and solve intricate puzzles. All rocked by a soundscape crafted by Christopher Larkin, the composer of Hollow Knight.

TOHU is set to release later this year on PC (Steam), PlayStation 4, Xbox One, Nintendo Switch and Google Stadia